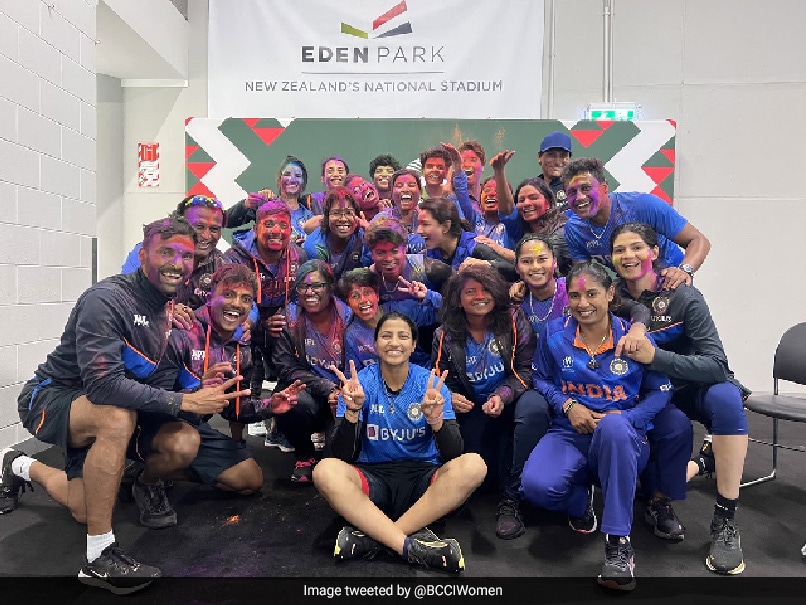 India women’s cricket team celebrated Holi in Auckland ahead of their game vs Australia.© BCCI Women/Twitter

Amidst the ongoing ICC Women’s ODI World Cup, Team India celebrated Holi in Auckland before the next match against Australia. Taking to their Twitter, the Board of Control for Cricket in India (BCCI) Women wrote, “Ringing in the festivities post practice in Auckland Here’s #TeamIndia wishing everyone a Happy Holi all the way from New Zealand.”

Here’s #TeamIndia wishing everyone a Happy Holi all the way from New Zealand #CWC22 pic.twitter.com/fipSh92Z0F

Marking the onset of the spring season, Holi is a festival of colours, symbolic of joy and victory of good over evil.

Even though Holi is a predominantly Hindu festival, it is celebrated by people of other faiths as well. It marks the arrival of the spring harvest season in the country.

People celebrate the festival by binging on some lip-smacking sweets, thandai and splash coloured powder, water, and balloons while chanting “Holi Hai”.

Coming to the ongoing World Cup, Team India will be facing Australia for their next clash on Saturday in Auckland. Till now, India have played four matches and got two victories and two losses.