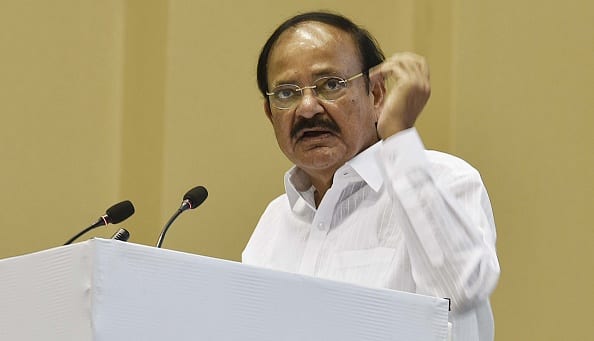 Vice President of India, Venkaiah Naidu was addressing a crowd after inaugurating the South Asian Institute of Peace and Reconciliation at the Dev Sanskriti Vishwa Vidyalaya in Haridwar. In his address, he called for a complete rejection of the Western education system to adopt a more Indianised form of education.

V-P Naidu basically urged the citizens of this country to give up their “colonial mindset” and be proud of one’s own identity. He rejected the years old Macaulay system, that was introduced by the British, saying that it confines education to the elite.

“We are accused of saffronising education, but then what is wrong with saffron? Sarve Bhawantu Sukhinah (all be happy) and Vasudhaiv Kutumbakam (the world is one family), which are philosophies contained in our ancient texts, are the guiding principles of India’s foreign policy even today,” Vice President Naidu said during his address in Haridwar.

“Centuries of colonial rule taught us to look upon ourselves as an inferior race. We were taught to despise our own culture, traditional wisdom. This slowed our growth as a nation,” he added.

“The imposition of a foreign language as our medium of education confined education to a small section of the society, depriving a vast population of the right to education,” Vice President Naidu said.

Venkaiah Naidu also suggested a few things that can be followed to revive the lost languages. “We should feel proud of our heritage, our culture, our forefathers. We must go back to our roots. We must give up our colonial mindset and teach our children to take pride in their Indian identity. We must learn as many Indian languages as possible. We must love our mother tongue. We must learn Sanskrit to know our scriptures, which are a treasure trove of knowledge,” he said.

He also stated how the ancient Indian culture at Universities like Nalanda and Taxila were prosperous.  “There was a time when people from all over the world came to study in the ancient Indian universities of Nalanda and Taxila, but even at the height of its prosperity, India never thought of attacking any country because we firmly believe that the world needs peace,” the Vice President said.