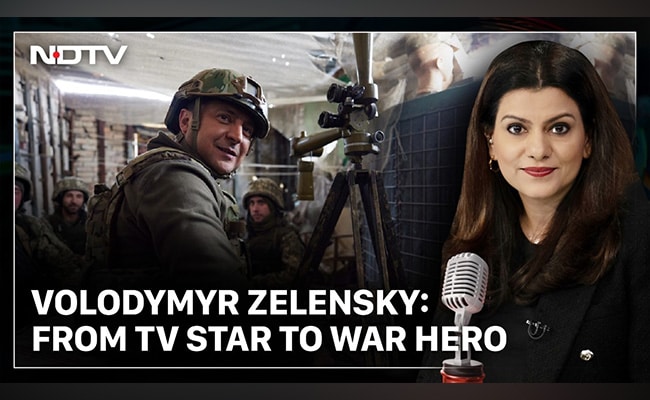 Hi, This is Hot Mic and I’m Nidhi Razdan. It’s been nearly a month since Russia invaded Ukraine. And in the midst of the horrors of war, a new and unlikely hero has emerged. Volodymyr Zelensky, Ukraine’s president, has become the face of resistance to the mighty authoritarian Putin. He is the symbol of resolve shown by the people of Ukraine who are fighting a David versus Goliath battle. Zelensky has addressed the US Congress where he got a standing ovation “Thank you for your support”. The British parliament, where again, he got a standing ovation and European Union MPs in the European Union parliament.

The 44-year-old Zelensky began his career as an actor and a comedian. Born into a Jewish family, Zelensky spoke fluent Russian like most Ukrainians do. Zelensky had family members who were killed in the Holocaust. His grandfather fought in the Soviet army against Nazi Germany. In 2006, Zelensky was the winner of the first season of Ukraine’s version of ‘Dancing With The Stars’. Those dancing clips have really gone viral on social media lately. But he was best known, perhaps, for his role on a TV comedy called ‘The Servant Of The People’, where he played a foul-mouthed teacher who unexpectedly becomes president after a video of his rant against corruption in the government goes viral. Sounds familiar?

When he ran for president in 2019, he in fact embraced the name of his television show for his party’s name and defeated the former Ukrainian president Petro Poroshenko, with more than 70% of the vote. Despite the overwhelming win in the elections, however, many in Europe did not take Zelensky seriously at first. According to a piece in The New Yorker, many European officials initially viewed Zelensky as non-serious and said that the first impressions of him were terrible. But once he was in office, he got down to business straightaway. His key campaign promises were to crack down on corruption and to end the military conflict with Russia in the country’s eastern provinces. Amongst the first things he did was to remove the immunity that members of parliament in Ukraine enjoyed so that they could be prosecuted in corruption cases. He also ended VIP culture. He cut down his motorcade to just two cars and ensured that there were no sirens blaring either. And he ordered government officers to remove his pictures because he was the president and instead replace them with pictures of their children so as to remind them what was at stake as far as their work is concerned. Zelensky wasn’t afraid to say at that time that he was learning on the job, that he was new to this and knew very little about what he was supposed to do.

One of the most remarkable things about Zelensky during this conflict has been the fact that he has refused to leave Ukraine and refused to leave his people. Even now. It’s a big contrast with, for example, what happened in Afghanistan only recently. He has remained steadfastly in the capital Kyiv, rallying the country through videotaped speeches, many of them on the streets with his own cellphone. In his speech before the invasion, Zelensky was seen wearing a suit and a tie. But once the war actually started, he changed into a green military shirt, which he wears even now to address the international community. Pictures have also shown him visiting wounded soldiers in the hospital. Now, all of this comes with great risk because Zelensky would be the prime number one target for Russian forces who would seek to assassinate him. But he has ventured out of his office and his home despite those risks.

His speeches to Western legislatures have made him a folk hero all over the world. In the UK parliament, for instance, he invoked Shakespeare and the words of Winston Churchill, telling British MPs “We will not give up and we will not lose. We will fight to the end in the sea, in the air. We will fight for our land, whatever the costs. We will fight in the forests, in the fields, on the shores, in the streets”. He got a standing ovation with Prime Minister Boris Johnson stating that the Ukrainian president had moved the hearts of everybody in this House.

Whatever happens now, Zelensky has turned out to be a courageous leader in times of great difficulty and tragedy. And that will always remain his legacy.