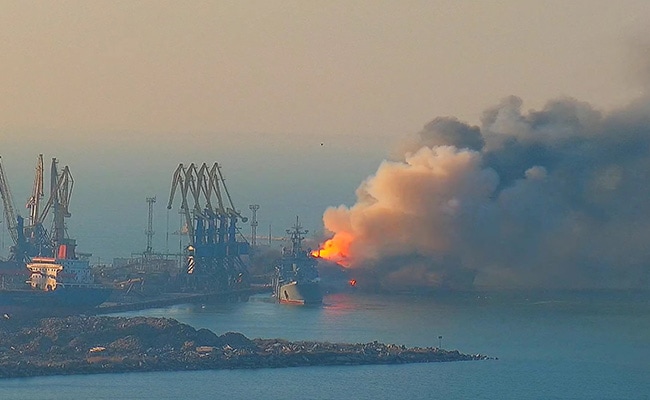 Ukraine-Russia War: Two vessels were seen in the footage sailing out of the dock as a third ship burned.

Ukraine said on Thursday it had destroyed a large Russian landing support ship, the Orsk, at the Russian-occupied port of Berdiansk on the Sea of Azov.

Video footage, which Reuters was able to confirm was filmed from inside Berdiansk, showed a column of smoke rising from a blaze at a dock, and the flash of an explosion.

Two vessels, one of which appeared to have been damaged, were seen in the footage sailing out of the dock as a third ship burned.

Reuters could not confirm if it was the Orsk on fire in the film. Russian officials did not immediately respond to requests for comment on the report that the support ship had been destroyed.

Russia said on Monday the ship had docked at Berdiansk, 70 km (45 miles) southwest of the besieged port city of Mariupol, and the website of the Russian armed forces news outlet Zvezda (Star) underlined the port’s importance to Russian supply lines.

The ship was capable of carrying 45 armoured personnel carriers and 400 people, she said.

As part of what Moscow calls a “special military operation” launched almost a month ago, Russian forces have seized most of the Ukrainian coast along the Sea of Azov except for Mariupol, which has refused to surrender.

“It doesn’t matter what kind of forces and means these losses were inflicted on the enemy – we can definitely say that this operation was successful,” Ukrainian Defence Ministry spokesperson Oleksander Motuzyanyk told a televised briefing.