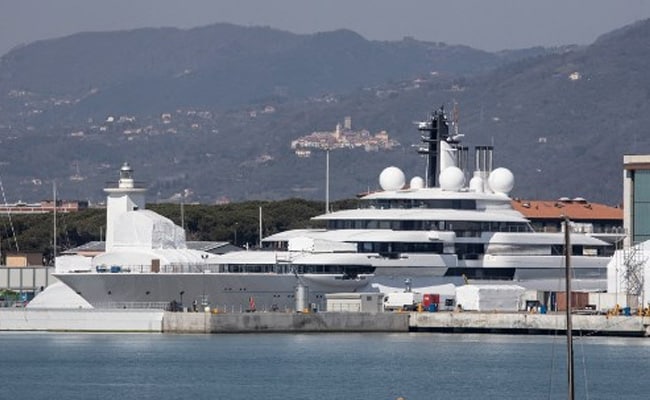 A view shows the multi-million-dollar mega yacht Scheherazade, docked at a Tuscan port

Ukrainian President Volodymyr Zelensky urged Italy on Tuesday to seize a mystery yacht worth some $700 million that has been linked to Russian President Vladimir Putin.

In an address to the Italian parliament, Zelensky said Putin and his wealthy backers often went to Italy on holiday and should have all their assets frozen to put pressure on them to end the invasion of Ukraine.

“Don’t be a resort for murderers. Block all their real estate, accounts and yachts – from the Scheherazade to the smallest ones,” he said, referring to a superyacht that is moored in the Italian port of Marina di Carrara.

The sleek, six-deck vessel has two helicopter landing pads and can host up 18 guests and 40 crew. Its owner has never been publicly identified, but there have been insistent rumours in the media that it belongs to Putin or a member of his inner circle.

An organisation set up by the imprisoned Alexei Navalny, a fierce Putin critic, released a report on Monday saying it had evidence that the boat belonged to the Russian leader.

It said many of its crew were drawn from Russia’s Federal Protective Service (FSO), which is tasked with protecting the Russian president, and regularly flew to Italy.

The Kremlin did not immediately respond to a request for a comment on whether Putin was the owner of the Scheherazade or on whether members of the FSO were crew members.

An Italy police source told Reuters on Tuesday that investigators did not believe the yacht was owned by anyone in Putin’s entourage. However, the source added that the government was still trying to ascertain who the owner was.

Italian Prime Minister Mario Draghi told parliament on Tuesday that his government had seized more than 800 million euros of assets owned in Italy by Russian businessmen as part of EU sanctions targeting Putin, his friends and associates.

However, officials have said very little is known about what Putin might own, or where he holds his assets.

In order to apply more pressure on Moscow, Zelensky told Italian lawmakers that the European Union needed to impose a full trade embargo on Russia, including a ban on oil purchases.

“Support a ban on entering your ports for Russian ships, so that they feel the cost of their aggression,” he said.