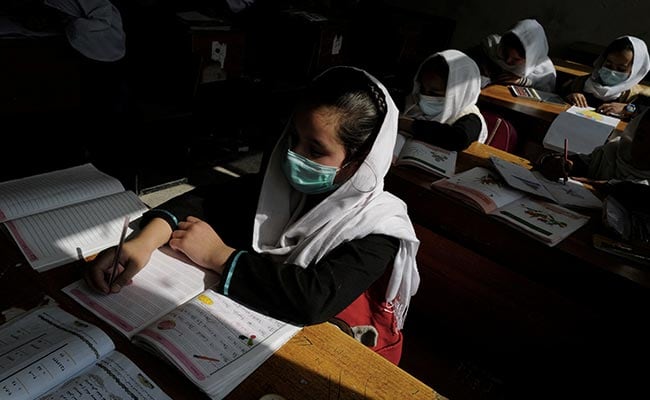 There has been no clear explanation for the last-minute reversal on secondary schools.

Days after the Taliban staged a cruel U-turn on allowing Afghan girls back to school, Adeeba Haidari feels as if she is in prison.

The 13-year-old was one of thousands of jubilant girls who flocked back to secondary schools reopening across the country on Wednesday, for the first time since the Taliban seized power in August.

But just hours into classes, the education ministry announced a shock policy reversal that left schoolgirls feeling betrayed and the international community outraged.

“Not only me but everyone you asked believed that the Taliban had changed,” said Adeeba, who briefly returned to Al Fatah Girls School in the capital, Kabul.

“When they sent everyone back home from school, we understood that the Taliban were the same Taliban of 25 years ago,” her 11-year-old sister Malahat added.

“We are being treated like criminals just because we are girls. Afghanistan has turned into a jail for us.”

When the Taliban returned to power, they promised a softer rule compared with their first regime from 1996 to 2001, which became notorious for human rights abuses.

They claimed to respect women’s rights, in line with their interpretation of Islamic sharia law, and said girls would be allowed to study through to university.

But the Taliban have imposed a slew of restrictions on women, effectively banning them from many government jobs, policing what they wear and preventing them from travelling outside of their cities alone.

“We miss our freedom. We miss our classmates and teachers,” said Adeeba.

There has been no clear explanation for the last-minute reversal on secondary schools, but reports leaked from a secretive leadership meeting this week suggested motives ranging from problems with uniforms to an outright rejection of the need for education for teenage girls.

The education ministry still insists schools will restart, but only when new guidelines are issued.

“They believe that if we study, we will gain knowledge and we will fight against them,” the 14-year-old told AFP, sitting with her books spread out on her study table at home.

It is agonising for her to watch boys her age walking past her house on their way to school each morning.

“It is really hard and painful for me,” she said.

Like many families, history is repeating itself from one generation to the next.

Nargis’s mother, Hamida, was forced to leave school during the Taliban’s first rule when she was about 10 years old.

The stories from what she thought was a distant past are flooding into her mind again.

“I used to feel strange when she told us how she wore a burqa or a chador, or how a woman was not allowed to go out without a male relative,” Nargis said.

Hamida now struggles to accept a similar fate for her daughter.

“My daughter will be held back from going to school,” she said. “The dreams she has in her heart will be shattered.”