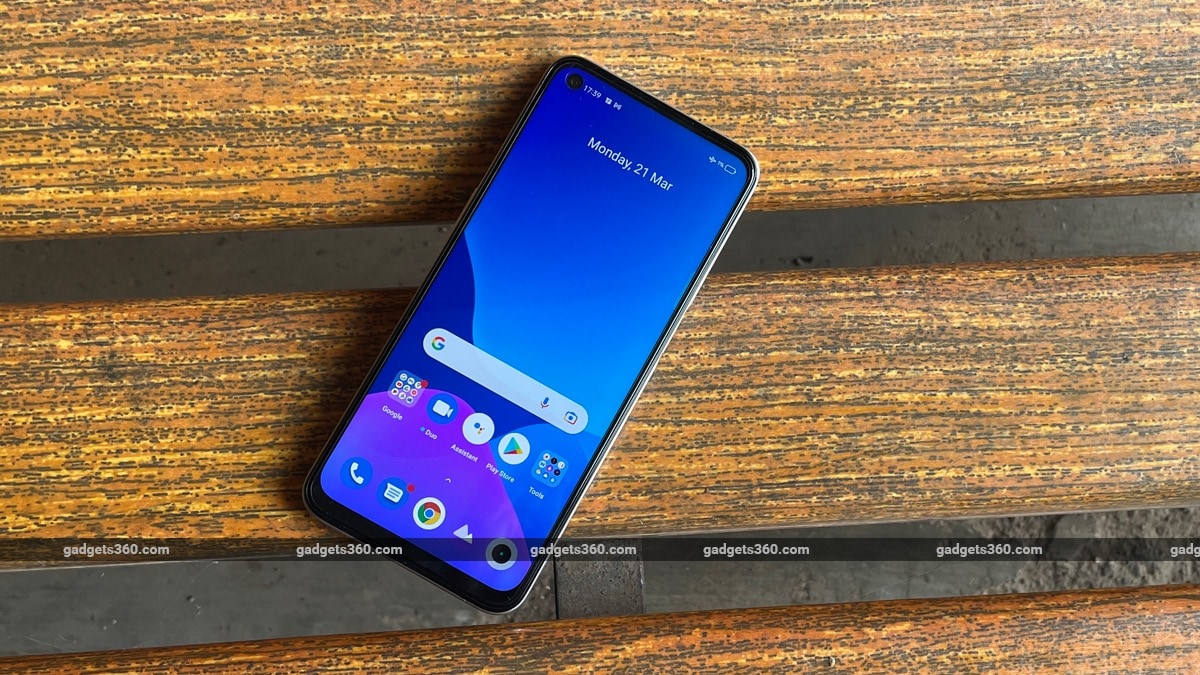 The Realme 9 5G and the Realme 9 5G Speed Edition are new additions to the 9 series. These launches are a little surprising since the company has launched three other smartphones in the same series over the past two months. The Realme 9 Series spans a wider price range than previous generations, with a lot more options to choose from. This is good but it could also cause some confusion for prospective buyers. I will be focussing primarily on the vanilla, Realme 9 5G in this review to see how it compares to other smartphones in the same price range.

The Realme 9 5G has a familiar design and it reminded me of other Realme phones I have used in the past. The large display has a camera hole in the top-left corner. It has thin borders at the top and the sides while the chin is larger. It isn’t distracting and is acceptable on a phone at this price. Realme has used plastic for the frame and back which helps keep the weight down to 188g.

The power button on the right has an integrated fingerprint scanner while the volume buttons are on the opposite side. The buttons are all positioned towards the centre of the frame and are easy to reach even with one-handed use. The phone is noticeably slim, measuring 8.55mm in thickness.

On the bottom, the Realme 9 5G has a 3.5mm headphone jack, primary microphone, USB Type-C port, and loudspeaker. The top of the phone is completely blank. The back of the Realme 9 5G is flat with curved sides that makes it comfortable to hold. It has three cameras placed in a rectangular module that juts out slightly. This causes the phone to rock about on a flat surface, which I didn’t like.

The Stargaze White finish has patterns on the back that shift in colour when viewed under light. The back panel does pick up smudges but these aren’t easily visible. Realme includes a clear case in the box.

The Realme 9 5G sports a 6.5-inch LCD display with a full-HD+ resolution and 90Hz maximum refresh rate. Realme has picked the MediaTek Dimensity 810 5G octa-core SoC. This phone has a 5,000mAh battery and supports 18W fast charging. You also get a compatible charger in the box. The tray on the Realme 9 5G has two nano-SIM slots and a microSD card slot for storage expansion. This phone also supports Bluetooth 5.1, dual-band Wi-Fi, and six satellite navigation systems.

In terms of software, it runs Realme UI 2.0 based on Android 11. My unit was running the March 2022 Android security patch. The UI is simple and easy to get around, which is good especially if you’re a first-time Realme user. You can toggle between the traditional three-button layout or swipe gestures for navigation. It also has features such as a smart sidebar, which is a floating carousel of shortcuts to your favourite apps and actions.

The hole in the display houses the 16-megapixel selfie camera

Realme UI 2.0 does offer personalisation options for changing the icon style, colour scheme, fonts, and icon layout. Inside the settings app, the Realme Lab section has experimental features for you to try. One such feature is Sleep Capsule, which stops you from using apps after a specified time to help you sleep without distractions.

I did find a huge amount of bloatware preinstalled on the device. Some of these apps such as FinShell Pay and Theme Store sent spammy notifications during the review period. On the upside, third-party apps can be uninstalled to reclaim storage space.

The Realme 9 5G offers decent performance and I never noticed any slowdowns with regular usage. The display switches between 60Hz and 90Hz depending on what you are doing. You can also lock it at 90Hz which makes scrolling very smooth. You can choose between Vivid and Gentle colour modes, depending on your preference.

Watching videos was enjoyable but the single speaker didn’t produce very engaging sound. The Redmi Note 11 is a direct competitor at this price, and offers an AMOLED display as well as dual speakers, so not having them on the Realme 9 5G was a little disappointing. The side-mounted fingerprint scanner on the Realme 9 5G was quick to read fingerprints and never needed multiple attempts to unlock the phone. Face recognition was also quick.

My review unit had 6GB of RAM, and allowed me to reassign up to 5GB of storage as RAM. Multitasking was a breeze and I could jump between different apps without ones in the background needing to be reloaded. App loading times were also decent.

Casual games ran fine without any issues. Even Call Of Duty: Mobile ran at ‘Medium’ graphics and ‘Medium’ frame rate settings by default, and was playable without any stutter. I played the game for 15 minutes which resulted in a four percent drop in the battery level, and the phone was barely warm to the touch afterwards.

The Realme 9 5G offers very good battery life and you can easily use it for a day and a half on a full charge. In our HD video loop test, the phone managed to run for 16 hours and 38 minutes which is a very good time. The supplied 18W charger is capable of charging it to about 27 percent in 30 minutes and about 52 percent in an hour. Charging the phone completely takes a little over two hours.

The Realme 9 5G has a 48-megapixel primary camera with an f/1.8 aperture that pixel-bins photos down to 12 megapixels by default. You don’t get an ultra-wide-angle camera on the Realme 9 5G which I think is a big miss. The other two are a black and white portrait camera and a macro camera. For selfies, it has a 16-megapixel camera. The camera app is fairly loaded and has a variety of shooting modes. It has quick toggles for HDR as well as AI scene recognition. There is a new Street Mode filter that applies a high-contrast, high-saturation look to the photos you take.

Daylight camera performance was decent. The phone was able to metre light correctly and enabled HDR automatically in bright scenes. I found the AI to be too aggressive with greens, making plants and trees look artificial. The output from the primary camera was decent if viewed as is, but magnifying these shots revealed quite a bit of missing detail. An ultra-wide-angle camera would have given this phone more versatility.

Close-up photos were good and the phone managed crisp shots as long as I was at a suitable distance. It also managed decent background blur. Portrait shots were sharp and had very good edge detection, along with adequate background blur, which can be adjusted before taking the shot. Macro photos were average and limited to 2 megapixels in resolution.

Low-light camera performance was strictly average while shooting in the regular ‘Photo’ mode. Photos appeared soft, and objects at a distance had a watercolour-like effect. Night mode did not make a significant difference to the output. It did produce slightly better detail in darker areas of a scene, but the output had a yellowish tint and looked like a filter had been applied. The phone didn’t stabilise shots either, so shakes caused unwanted blur.

Selfies looked good in daylight as well as low light. In low light, the Realme 9 used a screen flash which helped get better results. Portrait selfies were good, but the phone did apply a beautification filter by default.

Video recording tops out at 1080p for the primary camera as well as the selfie shooter. The Realme 9 5G does not stabilise footage by default. It does have an ‘Ultra Steady’ mode that crops the frame a bit to attempt to stabilise footage, and this helped improve video. Low-light footage did have slight grain.

Overall, the camera performance of the Realme 9 5G was good in daylight, while low-light conditions were challenging for it.

Realme has launched so many smartphones priced below Rs. 20,000 of late, that its models and series overlap, making it hard to pick the right one. The Realme 9 5G has a very simple design and the specifications, while good, won’t make buyers queue up for it, in my opinion. The Realme 9 5G shares a lot of hardware with the Realme 8S 5G (Review) and it looks like the company has downgraded some of that older model’s specifications to hit a lower price.

The base variant of the Realme 9 5G is priced at Rs. 14,999 and is better value for money than the one I tested. If you are a casual user, you could consider this, but I would recommend you take a look at the Redmi Note 11 instead as it has an AMOLED display, stereo speakers, and 33W charging. It lacks 5G, but none of the network providers in India even offer this right now, so it might not be a massive loss.