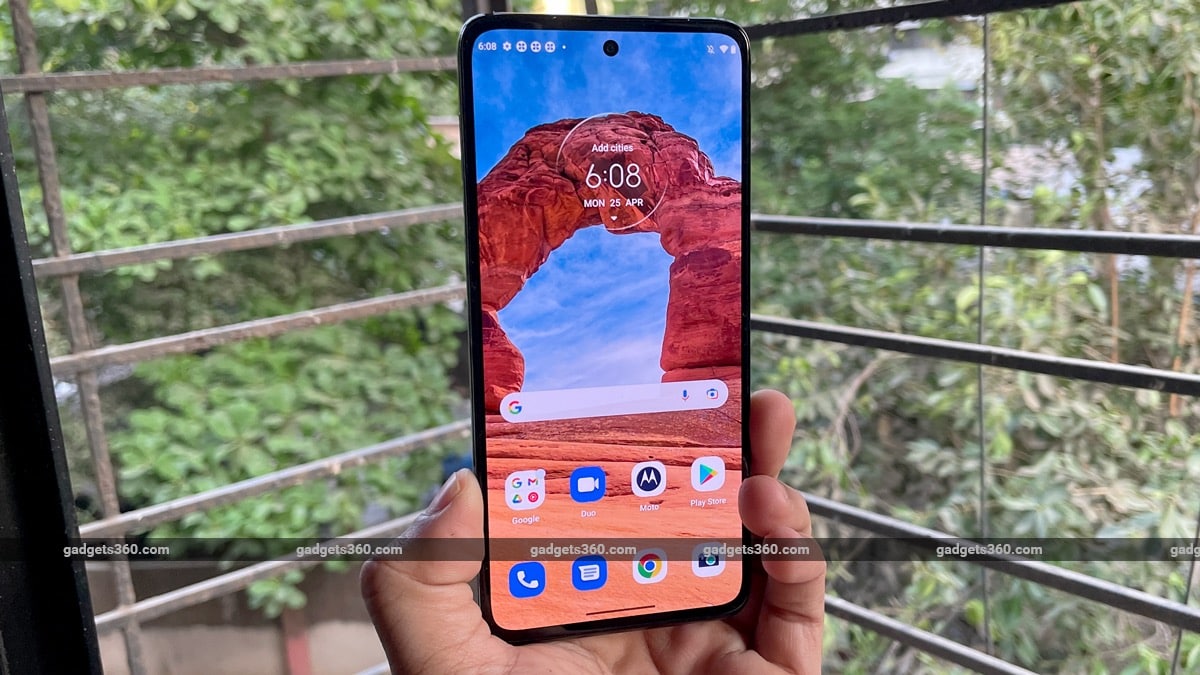 The sub-Rs. 15,000 segment is bursting at the seams with new smartphones. Interestingly, we are slowly seeing the introduction of 5G smartphones at this price, while 4G models are still being sold too. Motorola has now launched yet another model in this price segment, the Moto G52. This isn’t a 5G smartphone but boasts of features that aren’t so common, and might just make up for that.. So, should you buy the Moto G52 and stick with it till 5G becomes mainstream, or would you be better off with a 5G-enabled smartphone right now? I put the Moto G52 to the test to find out.

The Moto G52 has similar design cues to other recent Motorola models, which instantly make this brand recognisable. The Moto G52 has a big 6.6-inch display with thin bezels all around. These are amongst the thinnest in this price range, helping the phone offer a generous screen-to-body ratio. The display has a camera hole at the top-centre. The Moto G52 is made of plastic. It’s 7.99mm thick and weighs 169g.

The body has flat sides which helped me grip it. Motorola offers a side-mounted fingerprint scanner on the Moto G52 and it’s positioned on the right along with the volume buttons. My fingers rested naturally on the fingerprint scanner while holding the smartphone, which made unlocking it easy. The volume buttons need a slight stretch to reach. On the left side, there’s only the SIM tray.

Motorola offers stereo speakers on the Moto G52. It has a USB Type-C port at the bottom along with a 3.5mm audio jack. The back panel is flat at the centre and is slightly curved towards the sides. The triple camera module at the back looks a lot like the one on the Moto G51 5G (Review). The rear panel picked up smudges quite easily during use but the bundled clear case can be used to avoid this.

The Moto G52 sports a full-HD+ pOLED display with a 90Hz maximum refresh rate. pOLED panels aren’t very common in this price segment but allow for slimmer phones. The stereo speakers on this smartphone support Dolby Atmos and Snapdragon Sound. Powering the Moto G52 is the Qualcomm Snapdragon 680 SoC. The Moto G52 has a hybrid dual-SIM tray and can work with microSD cards up to 1TB.

You get Android 12 out of the box with Motorola’s MyUX customisations on top. My unit had the April 2022 Android security patch. Many smartphones in this price range still ship with Android 11, giving the Moto G52 a slight edge. Motorola also promises an upgrade to Android 13 and three years of Android security updates. Two Android version updates would have been better than just one, but this phone will at least be up to date in terms of security if you’re planning to use it for three years.

Motorola’s MyUX is very similar to stock Android in terms of looks, but has meaningful additions on top. The Moto app lets you set up customisation options including changing the colour scheme of the UI to suit your liking. Moto gestures let you perform certain actions. These will be familiar to users of previous Motorola phones, and there are also new ones such as the Power Touch gesture introduced with the Moto Edge series.

The Moto G52 ships with Android 12 out of the box

The Moto G52 comes with a few Google apps preinstalled, it also unfortunately includes some bloatware such as Dailyhunt and Josh. These pushed spammy notifications constantly, and I would recommend you uninstall them right away if you don’t intend to use them.

The Moto G52 is a budget smartphone, but the AMOLED display with its thin bezels and the stereo speakers make it feel more premium, and content is engaging. The display had good viewing angles and it did get bright enough outdoors. I was pleased with the performance of the stereo speakers as they could fill a small room with sound. The side-mounted fingerprint scanner and face recognition were quick to unlock the smartphone. You can change the colour profile of the display. It was set to Saturated by default, which I liked. The 90Hz refresh rate makes scrolling appear smooth, and you do have the option to switch to 60Hz. It was set to Auto by default and the phone changed the refresh rate based on what I was doing.

I ran benchmarks on the Moto G52 to gauge performance. It managed 268,576 points in AnTuTu, as well as 6,933 points in PCMark Work 3.0. It scored 376 and 1,584 points in Geekbench 5’s single-core and multi-core tests respectively. In 3DMark’s SlingShot graphics test it scored 2,131 points. These scores are nearly identical to those of the Realme 9 5G (Review) and the Redmi Note 11T 5G (Review).

I played Call of Duty: Mobile and the Moto G52 ran it well enough at the “Medium” setting for graphics as well as frame rate. I played for 18 minutes and noticed a 5 percent drop in the battery level. The phone did get slightly warm but not too hot.

The Moto G52 offered good battery life and went on for about a day and a half with my usage. In our HD video loop test, the phone went on for 16 hours and 3 minutes which is an acceptable score. The 5,000mAh battery got to 51 percent in 30 minutes and to 91 percent in an hour using the 33W TurboPower charger.

The Moto G52 sports a triple camera setup consisting of a 50-megapixel primary camera, an 8-megapixel ultra-wide-angle camera that doubles up as a depth sensor, and a 2-megapixel macro camera. It has a 16-megapixel front camera for selfies.

The camera app will be familiar to Moto users and is fairly feature-loaded. You can swipe within it to toggle between different shooting modes. It has a Pro mode that gives you better control over settings. It also has a Dual Capture feature that lets you superimpose photos and videos shot using the selfie camera and the primary or ultra-wide camera sensor simultaneously.

Photos shot with the Moto G52 in daylight were average. These did not have the best dynamic range and objects at a distance did lack detail. While shooting in bright conditions, the phone enabled HDR automatically, however the sky still turned out to be overexposed and detail was poor in the shadows. The ultra-wide-angle camera didn’t meter light very well in bright scenes. You can shoot at the full 50-megapixel resolution using the main camera. These shots had slightly better detail on zooming in, however, the resultant files were 12MB in size.

Close-up shots were good, and the phone could distinguish between the subject and the background. It also added a soft depth effect to the background. Portrait shots had good edge detection and the phone did allow me to set the level of blur before taking a shot. The Macro camera allowed me to get very close to a subject and managed decent results.

Low-light camera performance was strictly average. The Moto G52 managed to keep noise under control but photos appeared smoothened. With the Night mode enabled, it managed slightly sharper photos with better details. You would be better off using the ultra-wide angle camera only for landscape shots.

Selfie camera performance was good in daylight and acceptable in low light. You can also take portrait selfies using the selfie camera.

Video recording tops out at 1080p for the primary as well as the selfie shooter. The Moto G52 relies on EIS to stabilise footage. Daylight footage was acceptable as the phone could keep shakes under control. Low-light footage had noticeable jitter. Overall, I think the cameras do need some tweaks to compete with what other phones in this price range are capable of.

The Moto G52 is yet another smartphone in the already crowded sub-Rs. 15,000 segment. Motorola has made slightly unusual choices to give the Moto G52 a fighting chance here. The company has focused on entertainment, offering a crisp pOLED display and stereo speakers with support for Dolby Atmos and Snapdragon Sound. It runs Android 12 out of the box and you’ll get one guaranteed software update along with three years of security updates. Those looking to use their smartphone for multiple years will find this appealing. I don’t find the lack of 5G connectivity to be a deal-breaker at this point in time.

Sadly, the Moto G52 falls short when it comes to camera performance, and failed to put up a strong fight in different conditions. If you are a casual user who prefers stock Android and wants a device for media consumption, the Moto G52 should fit the bill. However, if you are looking for better performance, you could consider the Vivo T1 (Review) which is currently discounted, and starts at Rs. 15,990.