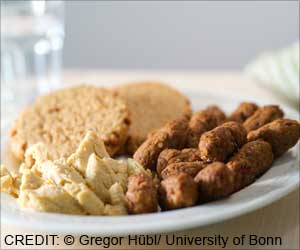 Klink-Lehmann and Hartmann, together with their colleague Nick Marcus, surveyed 441 men and women from all over Germany for the analysis.

The participants were asked, for example, to state how much they care about their health, whether they think humanity is heading for an ecological crisis and whether animal husbandry in agriculture should be ethically questioned. They also indicated their attitude toward meat substitutes and their intention to consume them regularly in the future.

“We have now examined the statistical relationships between these responses based on an extension of a recognized behavioral model,” says Marcus.

The researchers came across a surprising result: greater concern for the environment was not associated with a better rating of meat substitutes, nor with a greater intention to buy them.

“We had expected that ecological aspects would also play a role in the intention to consume meat alternatives,” Marcus explains. “However, that has not been confirmed.”

The researchers can only speculate about the reasons for the discrepancy between the participants’ environmental concerns and their behavioral intention. For example, the survey data already dates from 2017 – a time when the “Fridays for Future” movement did not yet exist.

“Since then, the issue of the environment has been much more prominent on the agenda,” Klink-Lehmann emphasizes. “As a result, more people are probably aware of the potentially negative environmental effects of meat consumption today than they were five years ago.”

Animal welfare concerns played a major role in the respondents’ consumption decisions: those who view factory farming critically, (unsurprisingly) have a more positive attitude toward plant-based sausages and veggie burgers on average. This attitude, in turn, has a beneficial effect on the intention to use these alternatives in the future.

A pronounced health consciousness is also associated with a greater willingness to consume meat substitutes. Furthermore, the attitudes of friends and close relatives toward meat substitutes has a significant influence on this decision.

Targeted marketing of the advantages

Marcus, Klink-Lehmann and Hartmann recommend, on the one hand, better communication of the ecological advantages of meat alternatives.

In addition, the industry should pay attention to a healthy and balanced composition in the manufacture of its products. Moreover, where animal-based foods such as eggs are used in meat substitutes, they should come from farms that pay attention to good animal husbandry.

“Animal welfare and health are obviously very important to consumers,” says Klink-Lehmann. “So manufacturers would do well to take these aspects into account and then market their foods accordingly.”