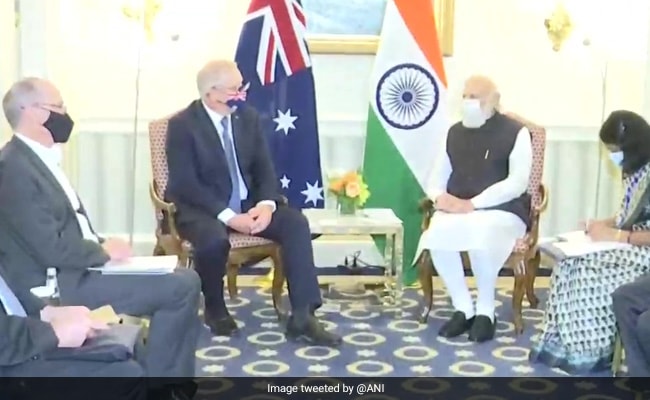 Prime Minister Narendra Modi and his Australian counterpart Scott Morrison called for an effective “Code of Conduct” in the South China Sea, which is fully consistent with international law.

“Leaders underlined the importance of being able to exercise rights and freedoms in all seas and oceans of the Indo-Pacific region, consistent with international law, particularly the UN Convention on the Law of the Sea (UNCLOS), including freedom of navigation and overflight,” the Ministry of External Affairs (MEA) said in a joint statement.

Both the leaders emphasised that resolution of disputes should be carried out through peaceful means in accordance with international law without threat or use of force or any attempt to unilaterally change status quo and that countries should exercise self-restraint in the conduct of activities that could complicate or escalate disputes affecting peace and stability, added the statement.

The leaders reiterated the importance of adherence to international law, particularly as reflected in the UN Convention on the Law of the Sea (UNCLOS), to meet challenges to the maritime rules-based order, including in the South China Sea, the MEA statement read.

“They called for any Code of Conduct in the South China Sea to be effective, substantive and fully consistent with international law, not prejudice the legitimate rights and interests of any nation, including those not party to these negotiations, under international law and support existing inclusive regional architecture,” the MEA statement said.

Tensions in the South China Sea area have continued to rise in the context of China’s naval expansion and the establishment of military outposts on illegally built artificial islands.

The “nine-dash line” claim that China has unilaterally and illegally made, covering almost the entire South China Sea area, has been clearly rejected by the international community.

On people-to-people ties, PM Modi and PM Morrison recognised the work of both countries to advance gender equality and agreed to continue working together to advance the empowerment of women and girls, including through addressing the gender gap in science, technology, engineering and maths disciplines.

They emphasised their ongoing cooperation to ensure the delivery of high-quality vaccines to Indo-Pacific and global partners.

During the summit, PM Modi appreciated the briefing by PM Morrison on the Australia-UK-US (AUKUS) partnership.

Leaders recognised Australia’s commitment to “not develop nuclear weapons and to uphold the highest standards of non-proliferation”.

Both the leaders expressed their shared commitment to a free, open and rules-based Indo Pacific, supported by a robust regional architecture, with ASEAN at its centre. They reaffirmed their commitment to an inclusive and prosperous region in which the sovereignty and territorial integrity of all states is respected and countries are free from military, economic and political coercion.

Moreover, the leaders underscored their commitment to the cooperation between India, Australia, Japan and the United States on advancing the Quad’s positive and ambitious agenda to promote regional stability and prosperity.

They welcomed the virtual meeting between Quad Leaders in March 2022 and looked forward to the next in-person Leaders’ meeting in the coming months. They also welcomed the close cooperation between India and Australia on the Indo-Pacific Oceans Initiative.