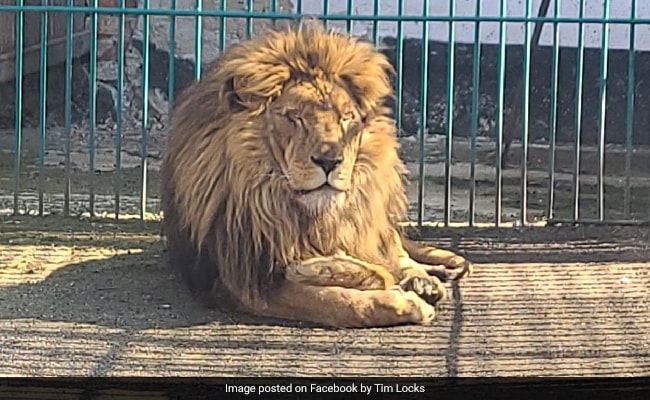 Simba the lion, photographed in his new enclosure at a Romanian zoo.

A four-day mission to rescue a lion and a wolf from war-torn Ukraine had a happy ending with the two zoo animals “settling in well” in Romania, Tim Locks – the British war veteran who spearheaded the rescue op – has said. According to Daily Mail, Mr Locks, a 45-year-old Iraq veteran, had been delivering aid in Ukraine when he heard about the plight of the animals from a conservationist at his hotel.

He embarked on a mission to save the two animals, driving from Lviv to Zaporizhzhia Oblast, where the lion and the wolf were kept in a zoo, along with two companions.

In the remarkable rescue operation, which Mr Locks documented on Facebook, the animals were transported to neighbouring Romania in the back of a minibus. The lion, Simba, and the wolf, Akela, were driven almost non-stop until they reached the Romanian border. Then, as the final leg of their journey, the animals were taken to a zoo in the north-eastern city of Radauti in Romania on Sunday.

Mr Locks shared an update on the animals on Wednesday. “We’ve just heard back from the zoo in Romania and it’s amazing to hear that both Simba and Akela are settling in well. Both are eating and drinking plenty and enjoying some chill time after the long journey,” he wrote.

He had earlier shared photos from the rescue mission on Facebook, describing how a crane was used to lift the lion and the wolf into the minibus. “It took 3 hours to load both animals into the back of a Ford transit minibus with the seats removed using a crane and a JCB,” he had revealed.

“We kept reminding each other that we’d got a lion and a wolf in the back of the van as we were driving and looking back to see there they were, just over our shoulders,” Mr Locks told Metro News.

He said guards at checkpoints were less than amused when he declared a lion and a wolf as their cargo. “One guard told us there was a war on and it was no time to joke around,” Mr Locks said. “I took him to the side of the van, opened the door, and showed him this proper big lion, like Aslan out Narnia.”

After dropping the animals off in Romania, the trio drove back to Ukraine to assist in humanitarian missions as the country continues its fight against Russian forces.