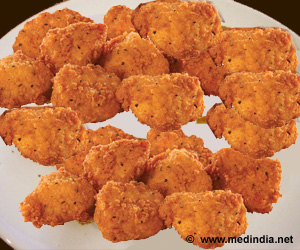 
And also, the
fussy eater said that on looking at vegetables and fruits makes her
choke and gag. She even turned down her grandfather’s £1,000 (Rs. 1
lakh) offer to eat a single garden peas.

Monro does not eat
breakfast, has chips in a bag for lunch, and dinner consists of six to
eight chicken nuggets with fries. This was her everyday diet.

She
has tried eating fruits and vegetables but she could not take a single
bite. “It’s not that I don’t want to try. It just makes me feel
sick, there’s a part of my brain that physically won’t let me do
it,” she said. She explained that she was diagnosed that she
had ARFID, an eating disorder.

She continued saying,
“It’s worse at lunchtime when people are eating sandwiches and I
have a packet of crisps. I just can’t see myself changing. I like the
smell of food, but if I try to eat it, it makes me physically
sick.“

Monro has tried treatment and therapy twice and hypnotherapy to allay her fears but they did not help at all.

People
with ARFID are very picky eaters with food. When they eat only limited
preferred foods as diet, it can lead to poor growth and nutrition. This
disorder definitely starts at a young age. People with this disease do
not feel hungry and will be turned off even after they smell the food.

The
chicken nuggets Monro cooks also have to be crispy for her to eat. She
said that people are surprised that she doesn’t get ill because of her
diet.

“A lot of people say they’re surprised that I’m
never ill. I’m also a very upbeat, happy person and people don’t
understand how I’ve got so much energy,” Monro said.
“It doesn’t affect me physically. I don’t feel lethargic or
anything and I’ve had blood tests but they’re all fine.” She
explained, “Doctors don’t really understand the condition. When
I go to the doctors, they say I’m fine because I’m getting protein from
the chicken and I’m not overweight or underweight.“

Last
year, when she noticed a chicken had a vein, she stopped eating them
for three months. She just survived the chips at the time.

Monro said that ARFID affects her mentally but her partner has been supportive of her.

Shockingly, the fussy eater said that she’s in great shape and doesn’t take any vitamins as diet or supplements.