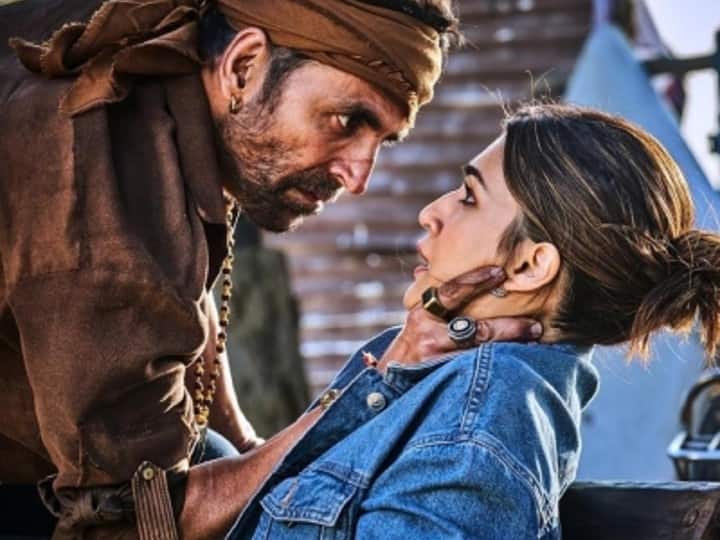 New Delhi: Farhad Samji’s ‘Bachchan Pandey’ is a tale of the self-proclaimed don of Bhagwa, Bachchan Pandey (Akshay Kumar), who has unleashed a reign of terror, mercilessly killing those who dare to challenge him.

How a budding director, Myra (Kriti Sanon) from Mumbai, along with her actor-friend Vishu (Arshad Warsi), decides to make a biopic on him and land in Bhagwa, and what ensues, forms the crux of this film that stretches for two and half hours.

The film is replete with caricatures and appears more like a dark comedy, as the humour is often garbed in gore, only with some supposedly witty one-liners coming to the rescue.

The plot appears decent, but its ambitious treatment adds to the confusion. The scenes are needlessly stretched and the violence is a determined effort.

Apart from the action sequences, there is a generous dose of blood and gore. With Bachchan Pandey and his coterie of goons — Kandi (Saharsh Kumar Shukla), Bufferiya (Sanjay Mishra), Pendulum (Abhimanyu Singh) and Virgin (Prateik Babbar) — slash people’s throats and fire at them without blinking an eyelid.

The first half of the film, although overstated, at least appears credible, establishing Bachchan Pandey’s character, but post-interval, the film makes for tedious viewing.

In the final act, factors such as Bachchan’s love life with Sophie (Jacqueline Fernandez), who’s killed, the betrayal by his boss (Mohan Agashe), and his mother (Seema Biswas), who has stopped speaking to him for the past 10 years, appear to be forced attempts to add melodrama, and evoke sympathy for Pandey. These only lengthen the film, apart from not being in sync with Pandey’s character and the flavour of the plot, and drag the film down by several notches in one go.

The music is anything but melodious. It is jarring and only contributes to the gory tenor of the film.

On the performance front, the film expectedly belongs to Akshay Kumar, who, with a damaged stone eye, an evil persona, driving around in his vintage car, delivers a strong and self-assured act, as always. While Bachchan Pandey’s back story justifies his motive to be the bad man, his turning over a new leaf, is a tad flimsy, hurried and unconvincing.

Kriti Sanon as the determined director, Myra, is a sure-shot winner. She is every inch the confident, creative and gutsy person she is supposed to be. At ease with Akshay Kumar, she exudes unparalleled confidence.

Arshad Warsi, who plays Vishu, an actor struggling to fulfil his father’s unfulfilled dream of making it big, shines in parts.

The ensemble cast of Bachchan’s goons are all competent, and they nail their characters; some others, such as Seema Biswas and Mohan Agashe, are wasted, Pankaj Tripathi as Bhavesh, an acting instructor from Gujarat, is extremely disappointing, with his over-the-top act and contrived Gujarati accent.

Overall, this Akshay Kumar-starrer, although it ends on a high note, with a message of good triumphing over evil, it fails to keep the audience enthralled, except in parts.