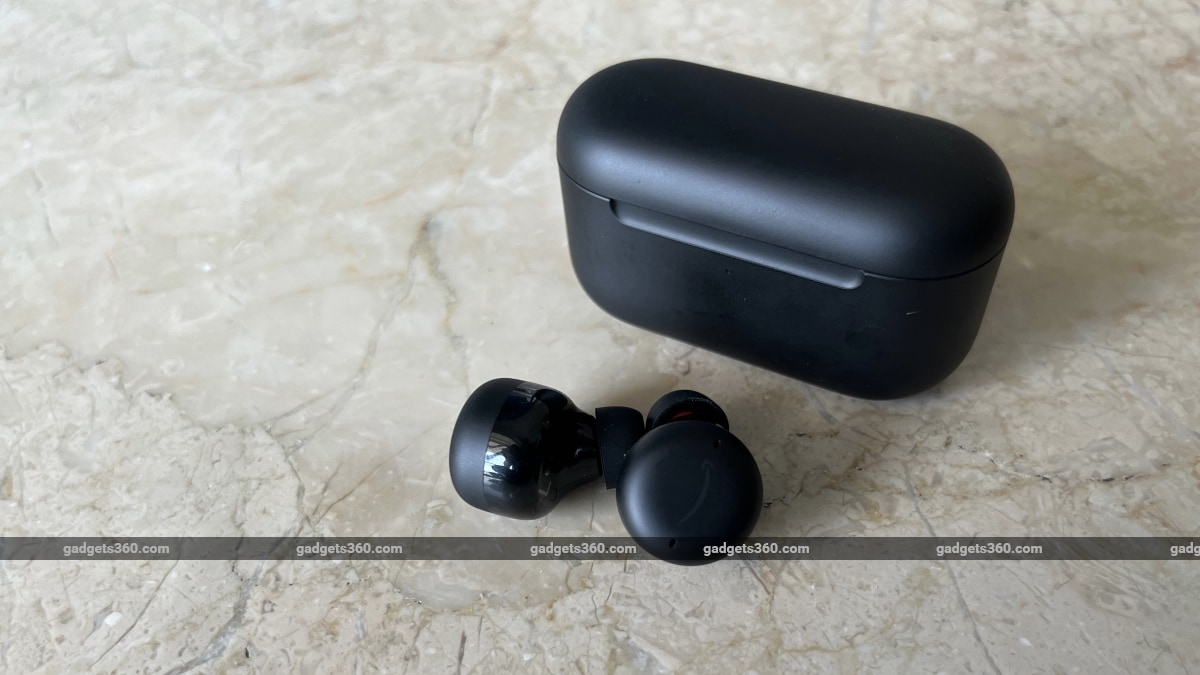 Among the three most popular voice assistants for smartphones and smart devices, Amazon’s Alexa is in my experience more versatile and reliable than Google Assistant and Apple’s Siri. It works well on both Android and iOS as well as the company’s own smart speakers and smart displays, plus third-party devices including wireless speakers, televisions, and various IoT gadgets and appliances. With the Amazon Echo Buds, Alexa now comes to the ultra-portable form factor of true wireless earphones.

The idea of a voice-assistant on a true wireless headset isn’t new; both Apple and Google leverage their voice assistants in the AirPods range and Google Pixel Buds series respectively. However, with the Echo Buds (2nd Gen), Amazon hopes to offer a much more complete experience in terms of features and capabilities, at a more attractive price.

The Amazon Echo Buds (2nd Gen) is priced at Rs. 10,999 onwards, and features active noise cancellation, optional wireless charging, and hands-free Alexa voice controls. Is this the best ‘smart’ true wireless headset you can buy right now? Find out in this review.

With the price of the Amazon Echo Buds (2nd Gen) starting at Rs. 10,999 in India, the feature-set and focus on Alexa puts these earphones in competition with options such as the Apple AirPods (3rd Gen) and Google Pixel Buds A-Series. However, the Echo Buds (2nd Gen) are at a slight advantage here, thanks to active noise cancellation which isn’t present on either of the aforementioned competitors.

I received the wireless charging variant of the Amazon Echo Buds (2nd Gen) for review, which is priced at Rs. 12,999. Qi wireless charging support for the case is the only difference between the two variants, and the headset is available only in black in India. The sales package includes a long USB Type-A to Type-C charging cable, four pairs of silicone ear tips of different sizes, and two pairs of wing tips of different sizes.

Unlike Google Assistant and Siri, which are built around their respective developers’ product and service ecosystems, Amazon Alexa has always been device agnostic and available for both iOS and Android, in addition to Amazon’s own hardware products and some third-party devices. This means that the Amazon Echo Buds (2nd Gen) can be used reliably on either Android or iOS, and I indeed found the usage experience to be pretty much identical with both platforms.

The earpieces of the Amazon Echo Buds (2nd Gen) are small and round, and look decent. There’s an Amazon logo on the outer side of each one, and each provides a proper in-canal fit. The inner sides have proximity sensors for wear detection, and the contact points for them to charge when placed in the charging case.

The earphones are IPX4 rated for water resistance, and are comfortable to wear. The fit was good, with adequate noise isolation in my experience. I preferred to use these earphones without the wing tips, but you might find them useful if you need a more secure fit, especially when using the earphones while walking or running.

The Amazon Echo Buds (2nd Gen) have touch controls, which can be customised using the Alexa app

The outer sides of the earpieces have touch-sensitive areas, and controls are customisable through the Alexa app. You can assign specific functions for a single-tap, double-tap, triple-tap, and long-press. The options include controls for playback, volume, invoking Alexa or your smartphone’s default voice assistant, cycling through active noise cancellation and pass-through modes, and more. When receiving a phone call or when on an active call, a double-tap will answer it or hang up.

I wasn’t particularly impressed with the charging case of the Amazon Echo Buds (2nd Gen). It’s light and small enough to conveniently slip into a pocket, but the hinge and lid felt a bit flimsy. I also noticed grime and fingerprints were easily visible on the surface. The pairing button and USB Type-C port are at the back, and the bottom has the wireless charging coil (on the Rs. 12,999 variant). There is a single LED indicator on the outside of the case, and two more on the inside to indicate the charge status of the case and earpieces.

Just like other Amazon Echo products, the Echo Buds (2nd Gen) uses the Alexa app for setup and configuration. The app does, of course, handle a lot more than just the earphones, but there is a useful panel as soon as the app is opened that displays the battery levels of the earpieces and the case. It also offers quick access to ANC and microphone controls, the settings menu, and exercise features such as starting a workout session.

The detailed Settings menu for the Amazon Echo Buds (2nd Gen) has plenty more options to help you set up the earphones to your liking. This includes equaliser and control customisation, enabling hands-free Alexa, and switching between ANC and pass-through modes. It’s well integrated on the whole, with the earphones registering as an accessory in the app alongside any other Echo and Fire TV devices you might have.

The Amazon Echo Buds (2nd Gen) have 5.7mm dynamic drivers, and use Bluetooth 5 for connectivity. It has support for the SBC and AAC Bluetooth codecs. There are three microphones on each earpiece; two facing outwards for voice and ANC, and a third on the inside to assist with ANC.

Battery life on the Amazon Echo Buds (2nd Gen) was acceptable, but the case fell short compared to competitors. The earpieces ran for a reasonable 4 hours and 30 minutes with ANC on and periodic use of hands-free Alexa, but the charging case added only two additional charges for a total of around 13-14 hours per charge cycle.

The Amazon Echo Buds (2nd Gen) is an all-rounder

Voice assistant support on true wireless earphones is fairly common, but most headsets tend to only work with the default voice assistant on your smartphone. If you’re heavily invested in the Alexa ecosystem in the form of smart speakers and IoT appliances, the Amazon Echo Buds (2nd Gen) deliver a simpler and easier experience with the Alexa voice assistant.

You can control appliances in your home, stream music and other audio content from a number of services such as Apple Music, Spotify and Audible, and even control playback and other device functions using only your voice. All of this works well with the headset. Performance with music and active noise cancellation, although not exceptional, was decent.

Using Alexa on the Amazon Echo Buds (2nd Gen) was a breeze. It worked well in hands-free mode, or using gesture controls. This does, of course, rely on your paired smartphone’s Wi-Fi or mobile data connection, since Alexa needs Internet connectivity to parse voice commands and act on them. Thankfully, you don’t need to have the Alexa app running on your smartphone in the background for this to work.

Alexa worked for just about everything on the Amazon Echo Buds (2nd Gen), just as well as it would on an Echo smart speaker. This included playing specific tracks or playlists through my linked Apple Music account, answering queries, controlling IoT devices in my home such as the Dyson Purifier Cool, and also ordering the Fire TV Cube to play specific content on my TV.

I was also able to use Alexa for basic hands-free commands to control playback and volume on the earphones, and even to place calls. Indeed, when properly set up and with a good Internet connection on the paired smartphone, the Echo Buds (2nd Gen) are practically as good as a smart speaker when it comes to voice assistant capabilities, and have the advantage of being able to work with the apps and services on your smartphone.

Sound quality isn’t exceptional when compared to other true wireless earphones in this price range. That’s not to say that there was anything out of place here; the Amazon Echo Buds (2nd Gen) sounded decent enough with most genres, and had a reasonably entertaining sonic signature. However, I felt that it lacked a bit at the top-end, particularly when it came to the quality of the tuning. It didn’t deliver the sense of eagerness and drive that I’ve heard on options such as the OnePlus Buds Pro and Samsung Galaxy Buds 2.

Listening to Dance Wiv Me by Dizzee Rascal and Calvin Harris, the sound was entirely inoffensive and comfortable, but felt a bit basic on the whole. The lows lacked energy and attack, and the mid-range and highs lacked sparkle and cohesiveness. The overall sound felt a bit underwhelming, and was similar to what I’d expect from much more affordable true wireless headsets.

Turning the volume up to around the 80 percent level made the earphones sound a bit better, but this also caused some listener fatigue. I found the 70 percent mark to be ideal for comfortable listening during long sessions. Exciting and well-put-together tracks such as Snitch by Netsky and Aloe Blacc helped bring out a bit more drive and feel in the sound. However, the Amazon Echo Buds (2nd Gen) generally played it a bit too safe with the sound, making for a listening experience that never felt unpleasant, but definitely came across as dull and plain at times.

Just like sound quality, active noise cancellation on the Amazon Echo Buds (2nd Gen) wasn’t particularly impressive, but it wasn’t bad either. There was a noticeable reduction in noise in both indoor and outdoor environments, but it didn’t feel as competent as it should have. While it did make listening a bit easier and more focused, particularly when I was listening to audiobooks during my daily exercise routine, noise cancellation wasn’t quite as impressive as on other earphones in this price range.

Interestingly, the Amazon Echo Buds (2nd Gen) also supports workout tracking. This uses location services on your smartphone to assist with counting steps. The step tracking was reasonably accurate, with the earphones measuring 1,030 steps when I manually counted 1,000 steps. This might be useful to some, but true wireless earphones aren’t something you wear all the time like a smartwatch, so there’s limited usefulness for a feature like this in my opinion.

Call performance and connection stability on the Amazon Echo Buds (2nd Gen) were decent enough, and I found it particularly useful to be able to use Alexa to place calls with voice commands.

The Amazon Echo Buds (2nd Gen) is an impressive pair of true wireless earphones in many ways, offering an all-round competent experience with everything it sets out to accomplish. Like other Echo products, the core capabilities revolve around Alexa, and if you’re already invested in Amazon’s ecosystem, this could be the ideal pair of true wireless earphones for you. You get a lot for the price, making this a value-for-money option.

However, sound quality and active noise cancellation performance aren’t quite up to the mark,  compared to other options in this price range, particularly the OnePlus Buds Pro which offers a far better listening experience. Battery life is also less than ideal on the Amazon Echo Buds (2nd Gen).